Since I often solve computer problems using my own hardware, I decided to buy the cheapest and smallest size USB devices to connect computers to LAN and WiFi networks. In this entry I will present what I bought and how it works (iperf3). 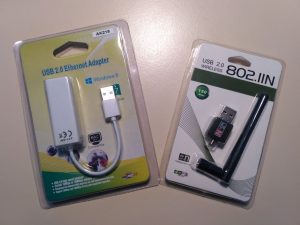 The picture above shows both devices. Both were produced in China. I think there is no point in writing over their full specification, because it is not described in any special way. The LAN card was purchased for 9.99 PLN, and WiFi for 15.88 PLN.

My main goal, as I wrote above, is to diagnose or fix problems with computers. In terms of price, no good results can be expected. However, it’s worth checking out what to expect from such cheap equipment. I used two computers for the tests:

The first device to be tested was LAN card. Unfortunately, in the tests it turned out to be rather poor (to be sure, I did the tests also by connecting it directly to a laptop with a LAN cable, in order to avoid possible problems with the switch operation). The red LED lights up/flashes inside the unit during operation. Below are the test results:

Low performance is also confirmed by tests of copying a large file (1.35GB) and many small ones (size from 100KB to 25MB, altogether around 900MB) in Windows through the shared folder service. The results ranged from 400 to 800 KB/s.

The device is not suitable for copying files as you can see. However, for configuring routers or terminal connections it is enough.

Another tested device is a WiFi card for USB. Equipped with a small antenna, it seems to be a device on the level above. However, let the figures speak.

The card was located 2 meters from the AP. There were no obstacles along the way. The signal quality was at the level of -22dB. 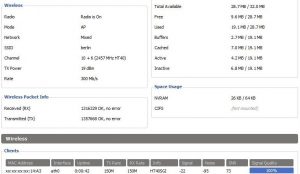 So it looks like WiFi card is doing pretty good or even great! The fact that the device has an antenna socket in the popular RP-SMA standard is an additional advantage. In fact, I do not find any bad things about it..

And that’s basically enough. I hope that those who are considering buying similar solutions will find this text helpful.