Recently, I have been able to purchase an SSD from Micron, the 5200 ECO with a 3840GB capacity. The purchased item is branded by HPE (Hewlett Packard Enterprise, model VK003840GWSXL). In order to update the device's firmware, I encountered problems, the solution of which I would like to share. You are welcome. 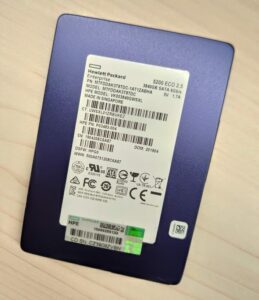 The purchased SSD is a version dedicated to HPE ProLiant servers. The drive has a SATA 6Gb interface and is 2.5 inches (7mm high). On Micron's website HERE you can read more about this device. As I like to have the system components updated, I checked if there are newer firmware versions for this drive. It turned out that there is, and that the change is highly recommended because the basic version can cause hanging (the basic firmware version is HPG0, that's what I had). The manufacturer released an update – the latest version is HPG2(C) HERE.

At this point I encountered a problem, I use Windows 10 Pro and the updates have been released for Windows Server, Linux Suse and RHEL, and VMWare ESXI/vSphere (which means also Linux at the base). My current computer is Lenovo laptop, equipped with nVidia RTX 2070 Max-Q graphics chip, with which some tested Linux didn't want to run (display errors). I also don't have any Windows Server installer at hand.

The first attempt to run the installer for Windows Server in Windows 10 Pro ended with an error (message below): 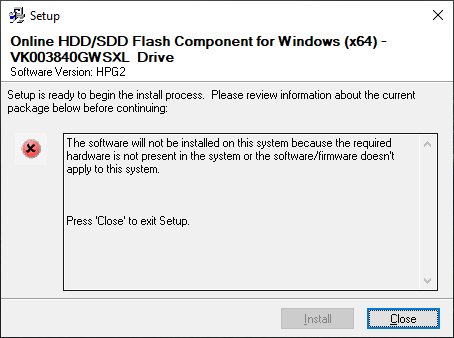 Another attempt was to run CentOS 7 Live on a laptop, which failed, and it was not even possible to read why, because the image on the monitor was broken (the individual lines overlapped). The picture below: 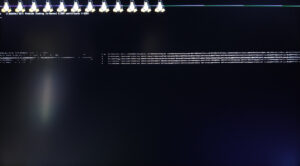 Wondering how to make the update I realized that I need a Linux system that works properly with my graphics, which works without problems with the .rpm packages provided by HPE to update the firmware on RHEL. The closest thing to RHEL is Fedora, which has Kernel Linux version 5 in its latest release, and is being updated on an ongoing basis. It also supports UEFI correctly and has a live image ready. You can download the Fedora system from this page: https://getfedora.org/pl/workstation/download/.

Fedora can be started with a USB stick or DVD disc. After starting, you should get to the console and download the appropriate file (exactly firmware-hdd-d1cf327bc4-HPG2-3.1.x86_64.rpm <- link to HPE's file page).

The next commands in the terminal (installing the package, going to the folder with the update program, running it, and selecting the disk and updating):

The program will display a list of drives that can be updated, you choose a number from parentheses.

This should be enough, if the process was successful, you should see information like this:

If something went wrong, or you would like to see the update process report thoroughly, the result files are located in /var/cpq/.

And that's basically all. Good luck!

I recommend:
Dentist at Zgorzelec
Hand made decorations
DSLR